After an expose was written on the dubious political leanings and outright promotion of modernist heresy by content providers at Ancient Faith Ministries, it naturally drew attention of the concerned faithful.

The article was shared widely, making many people aware of the insidious agenda. This caught the attention of the wolves in sheep’s clothing, and thus the spin doctors are furiously attempting to cover their tracks.

Unless you truly believe that saying the sky is yellow can make the sky yellow – when anyone with eyes can see it is a pure blue – these depressing attempts to justify their sin (instead of repenting of it) only drives home the original point.

On the popular “Byzantine, TX” blog, one of Ancient Faith’s newest authors, Summer Kinard, decided to share her version of truth about my article:

Let us break down this statement provided by Ms. Kinard and compare it to the hard evidence she herself curated.

Regarding the photo of her attendance at the Raleigh Women’s March, she said:

“I do not agree with the direction of the Women’s March organization, and I do not promote or associate with them.”

Then why march with them – is that not the definition of association? And posting photos of your participation, is that not promotion?

In a sea of rainbow flags, an army of feminists (some obscenely dressed as genitalia) holding posters demanding abortion rights even while their children march alongside them, is it much of a stretch to presume you align yourself with these values when you share a photograph of yourself smiling among them?

To refresh your memory, here are photos from the very same march, of which you were in attendance, and see the filth being celebrated around you. Here is a video of rainbow flags marched down the center of the street in your hometown during the event.

You did not see this behavior or these signs? Multiple searches across Instagram did not find a single pro-life tag amongst the womensmarchraleigh tags, so which organization were you marching with again?

“I am adamantly pro-life.”

Why then do you associate so closely with Angela Doll Carlson, a woman who outright claims to be pro-choice? You share her content, she shares your content, it appears you are friends as well as colleagues. How can her anti-conservative and anti-life viewpoints escape your notice when they are obvious to the most casual of observers?

Regarding the disturbing photo of you participating in the women’s march:

“I had no idea that people would take that photo to mean something so wholly opposite my intent, especially without even asking me for clarification. I have since removed it, as it apparently causes confusion.”

Apparently causes confusion? The confusion lies only in wondering how someone with a Ph.D. could act so naive and feign shock at surrounding yourself with feminists, calling yourself a feminist, and thus finding yourself painted with a feminist brush and all of the connotations that entails.

Regarding the article about Transgenderism:

My conclusion was that he [Bruce Jenner] was wrong . . .

“The ‘new beauty’ was saying that men and women are both as God made them and good, and we should seek to find the resurrection meaning of our bodies rather than trying to change them to suit the modern taste for lust.”

Your spin does not ring true, in light of the explicit statements made in your article. You specifically said that “gender is a social construct” and that “the magazine cover featuring Jenner’s sexual transition is beautiful”.

How can saying that “men and women are both as God made them” be squared with your claim that “gender is a social construct”? Which statement are we supposed to believe?

On the OCN website there were an overwhelming number of negative responses, and on the OCN social media page many people left comments describing their disgust at your article.

“I do not believe that there is such a thing as transgender, because I believe that God makes us in the bodies that He wants for us.”

You yourself posted how proud you are of your friends standing up for their beliefs and making everyone welcome, regarding opposition to the NC HB2 legislation, a.k.a. the “transgender bathroom bill.” While the state of North Carolina was trying to keep men out of women’s restrooms, you applauded those who defied the law.

How can you claim to oppose transgender propaganda, when you have been so vocal in your open support of it?

Regarding the book about the queer girl:

“As to the one tweet out of nearly 9,000 that seems to have caused offense, that was my mistake.”

Actually you tweeted twice about this book featuring a queer Jewish character. One tweet came immediately following a tweet you made about an autistic Orthodox girl character. You are known for writing about Orthodoxy and autism, are you not? Is it wise to mix these worlds? 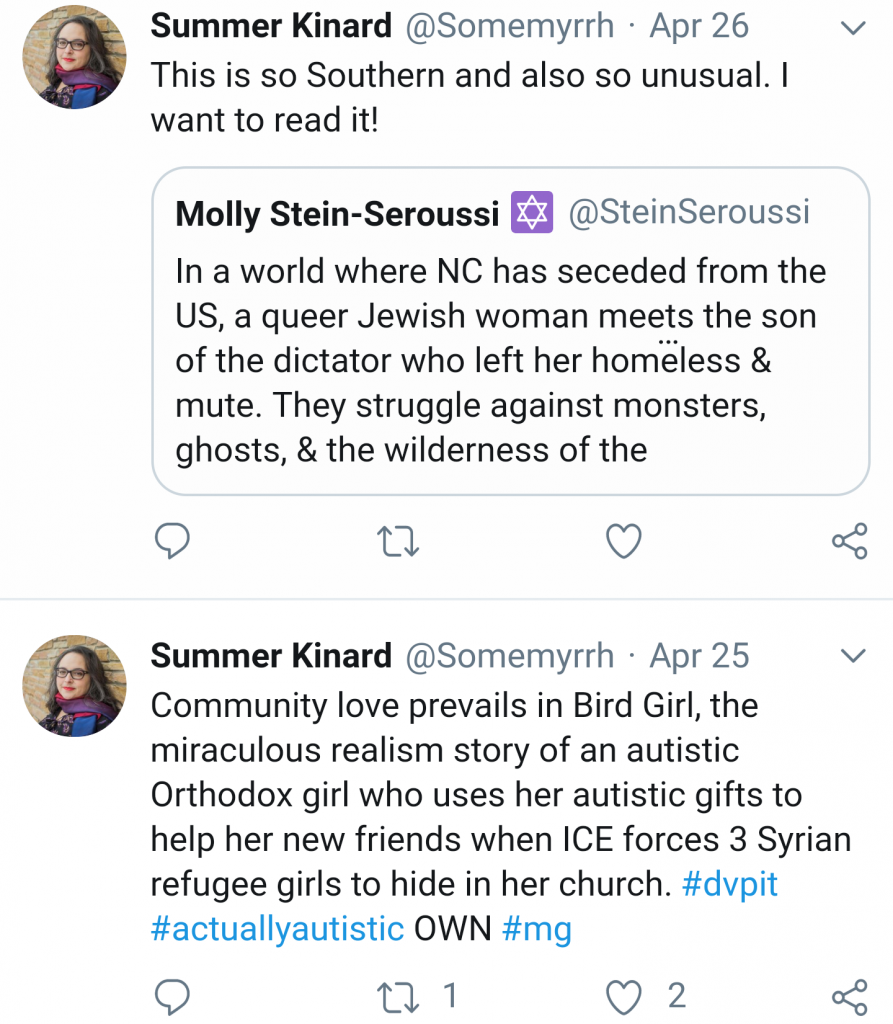 Regarding homosexuality and gender:

“My personal views are strongly conservative around issues of sexuality and gender.”

“I also do not promote homosexuality or the agenda that pushes it as normal and puts in to the forefront of politics, media, and even children’s education.”

Then why are you so incredibly close with Charlotte Riggle, a woman by her own posts constantly pushing LGBT agenda before children’s eyes? 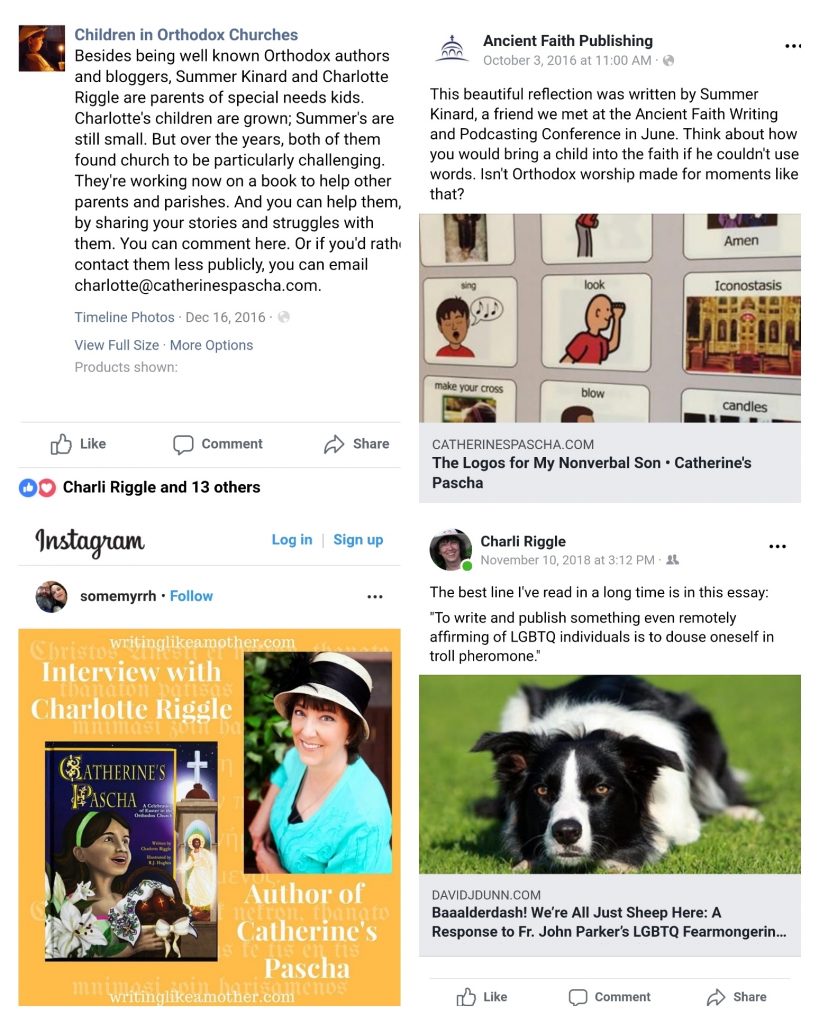 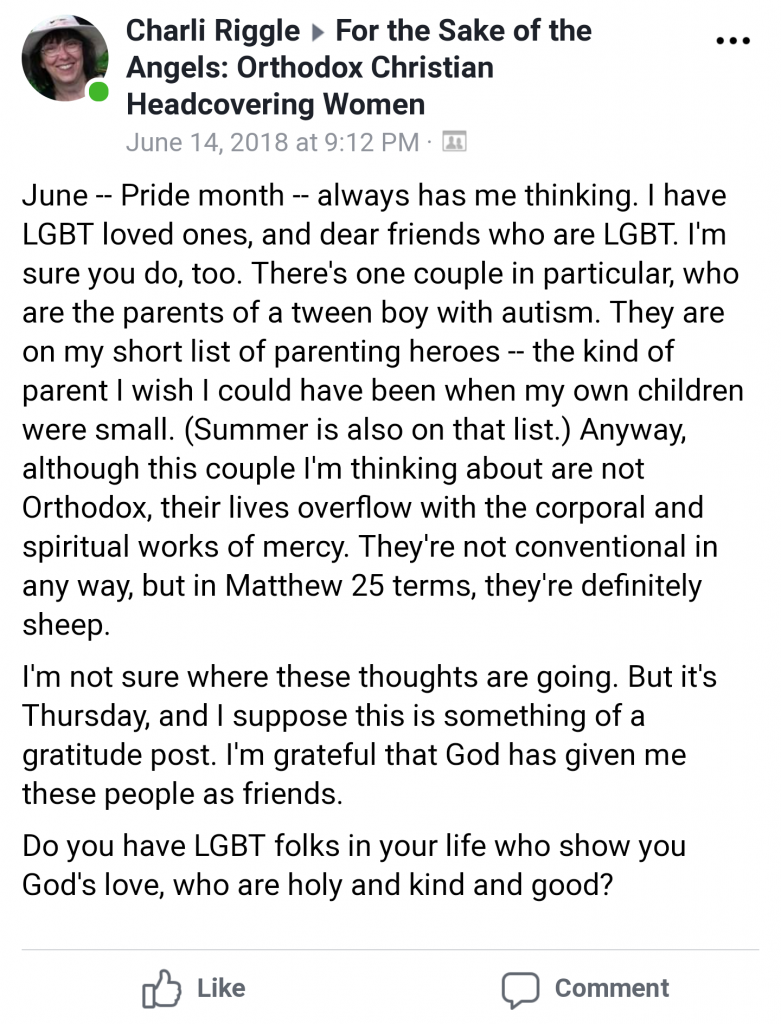 Charlotte Riggle (your dear friend) donates to a children’s group who publishes lists of LGBT books specifically for children. She posts positive review of a book normalizing homosexual families on her Orthodox blog. You interview her, post her links, she posts your links, are writing a book with her, and you express your love for her even as she shares approval of transgenderism and homosexuality time and time again.

Would not true love be trying to convince her to turn away from such sin and return to God? By virtue of promoting Riggle you promote her sinful agenda. You display rainbow toys, innocent or for amusement of liberal friends, a tongue-in-cheek wink of support?

“I am deeply concerned about the grooming and sexualization of children and the abuse of traumatized and autistic teens who are being decieved into believing that their dissociative feelings are part of the transgender lie.”

Then Charlotte’s husband, a member of minor clergy, should deeply concern you as he attends LGBTQ Youth Leadership conference for children as young as middle school aged. Is this not a confusing time for children, would he share gospel with these tender souls or does he seek to affirm the lie and encourage them to embrace being homosexual? Serious questions you should ask your “dear friends.”

Your actions do not line up with your pretty words, Ms. Kinard. You attempt to paint yourself as an ingenuous individual wholly misrepresented. You may pull wool over the eyes of others, but do not insult the intelligence of the faithful who have eyes to see.

« Orthodoxy’s Appeal to the Liberal Left